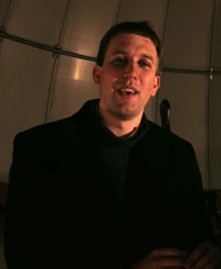 Dr Chris Lintott is an astrophysicist working as a post-doctoral researcher at the dept of Physics at the University of Oxford. He is involved in a number of popular science projects aimed at bringing astronomy to a wider audience. Namely, he is also Head Zookeeper at The Galaxy Zoo Project (a crowd-sourcing global project that finds new Galaxies). He is also co-author of Bang (along with Dr Brian May… yes, the one from Queen!), a regular Times columnist and Sky at Night presenter. You could say he’s a young pretender to the great Sir Patrick Moore (minus the monocle of course).